Efficiency & Flexibility for Cold Storage
Making the world’s cold storage systems more efficient, protecting food quality & reducing energy costs up to 50%.
Video: See How TES Adds Efficiency & Flexibility
Video
Why we do what we do We believe refrigeration and the cold chain can do more with less - better protected food, more resilient & sustainable facilities, and less energy use while helping utilities address the electrical grid challenges.
Watch Video
Awards
Viking Cold is named one of the 2019 Top Green Providers We are proud to be selected to Food Logistics Top Green Providers for the 3rd year in a row for our work protecting the environment, food, and our customers' profits.
Read More
Case Study & Video
TES in an Ammonia Refrigerated Low-Temperature Warehouse Decreased consumption 43% and demand 29% for 13 hours.
Watch Video & Read the Study
Energy Savings
kWh
Energy saved for our customers.
See how much we could save for you
Video
Learn how Thermal Energy Storage improves efficiencies, adds flexibility, and protects frozen food. See how TES improve cold storage operations.
Watch Video
Case Study
TES in a Grocery Store Walk-In Freezer International grocery chain finds up to 85% load reduction and a 60% peak period run-time reduction for multiple energy saving strategies.
Read the Study

Viking Cold Solutions enables companies to achieve up to a 35% or greater reduction in energy costs through efficiency and energy storage flexibility.

Thermal Energy Storage (TES) leverages phase change material to store energy in the form of cold for future use. It is engineered to freeze/thaw at specific temperatures commonly used in frozen cold storage (-20°F to 32°F or -28°C to 0°C). This allows the refrigeration equipment to be turned off for long periods of time (up to 13 hours) while maintaining stable temperatures in the freezer.

X
Reduce Energy Costs 20 to 35% or More Improve Temperature Stability Maximize Refrigeration Efficiencies Estimate Cost Savings for Your Facility
We save our customers 20 to 35% or more on their energy costs. TES adds efficiencies and flexibility to existing refrigeration systems to avoid peak pricing, reduce overall load, and reduce net consumption. Now cold storage operators and grocery stores can buy, store, and use their energy when it's most economical for them.
Thermal energy storage stabilizes temperatures by reducing the number of temperature fluctuations, dramatically slowing the temperatures' rate of rise, and providing thermal back up protection to maintain temperatures 3X longer in the event of a power outage or equipment failure.
TES improves the efficiency of existing refrigeration systems in many ways. 1) increasing refrigeration run time during hours with lower ambient temperatures 2) running the compressors at maximum designed efficiency levels 3) consolidating up to 85% of the heat infiltration directly in the refrigeration air flow 4) no additional mechanical components or parasitic energy consumption 5) the PCM’s higher heat transfer rate (eight-times that of frozen food). All of this means more heat is removed using less equipment run time and an average of 26% fewer kWh.
See how much energy Viking Cold's thermal energy storage technology could save your facility. Use our Energy Savings Calculator.

Energy Savings for Our Customers

MT
Recent Posts From Our Blog 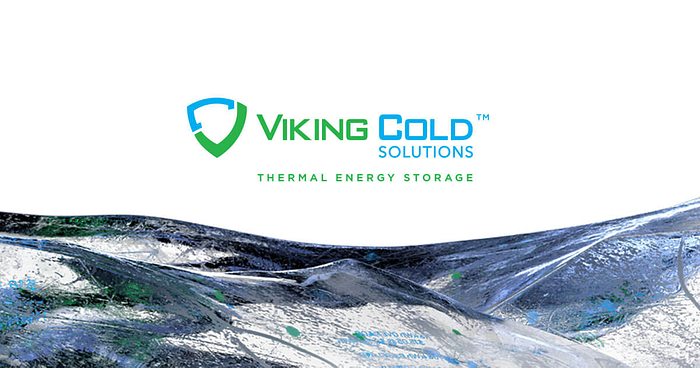 How Viking Cold Can Help Your Energy Efficiency Goals

Energy costs around the U.S. have been climbing leaving consumers wondering "how high will they go?" States such as Hawaii, Massachusetts, and California have the highest electricity rates in the country, with California as the second-largest energy consumer in the nation after Texas. In the last five years, electricity costs in the Los Angeles area exceeded the national average by 34% or more since 2018 – see Chart 1. Chart 1: ­Average prices for electricity U.S. & Los Angeles Source: U.S. Bureau of Labor Statistics Despite California’s high-energy consumption, its per capita energy consumption is less than most states due in part to its mild climate and its energy efficiency programs. The Golden State primarily produces electricity from solar, geothermal, and biomass energy, making it one of the most energy-efficient states in the country – but that isn’t enough for California. The state has committed to reaching a goal of 100% renewable and zero-carbon electricity by 2045, and the California Energy Commission (CEC) is leading the way. The CEC supports energy research and development programs to spur innovation in energy efficiency and has lately completed a major study on the route to zero net energy (ZNE), which includes Viking Cold Solutions’ Thermal Energy Storage (TES) in the blueprint for a path to net zero emissions for commercial buildings. The Viking Cold TES system was installed in the walk-in grocery freezer at a San Francisco Whole Foods store. This installation included Phase Change Materials (PCM) mounted on the ceiling of the walk-in freezer as well as cloud-based intelligent controls integrated with the existing refrigeration controls. According to the report, refrigeration accounts for a majority of the store’s electrical load, therefore thermal PCM, also known as thermal energy storage or TES, is a promising method for storing small amounts of excess energy. TES allows refrigeration compressors to run less often when energy costs are high (and energy production is low) and to run more often and store thermal energy when energy costs are low (and there is excess generation). This reduces cycling of the compressors and refrigeration energy costs, ultimately improving the efficiency of existing refrigeration systems. This is done by increasing the percentage of the total refrigeration run time that occurs during hours with lower ambient temperatures, thereby running the compressors at higher efficiency levels – see Chart 2. Chart 2: ­Plot comparing the predicted baseline energy with post-retrofit energy consumption for Viking Cold System Source: CEC Report, Figure D-9 TES technology combines intelligence with PCM to maximize the energy efficiency of the refrigeration system. Viking Cold PCM cells add thermal mass to a room, providing the ability to hold designated temperatures for much longer periods, which helps reduce refrigeration runtimes. Intelligent controls and an energy-management system help maintain a constant temperature and alert operators about any mechanical malfunction or power outage. The CEC study concluded that TES technology produced 25% energy savings and was proven as an applicable energy conservation measure to help achieve California’s energy efficiency goals. The results of this study were released by the CEC as a blueprint for a successful path to ZNE commercial buildings in California, but this blueprint could easily be one for the entire world. Read more about Viking Cold’s approach to cold storage efficiency here. For additional information about the CEC study, click here. 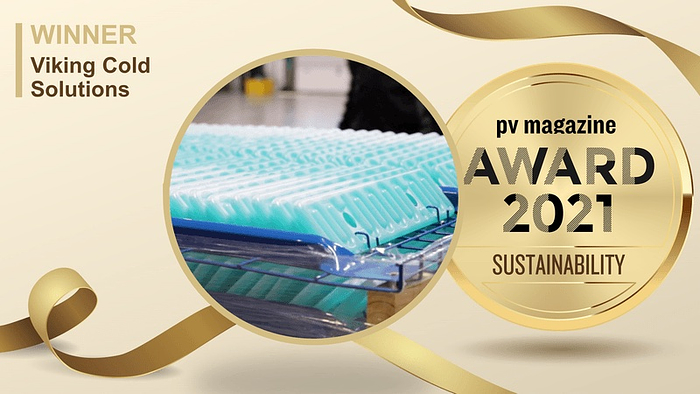 pv magazine recently recognized Viking Cold Solutions as the 2021 Sustainability Award winner for its innovative Thermal Energy Storage (TES) technology and services. This accolade is awarded to companies with technological innovations and groundbreaking solutions in the solar and energy storage industries. An independent panel of jurors cited the energy efficiency and the scalability of the company’s TES technology as two of the reasons Viking Cold was selected over hundreds of other companies vying for awards. This international recognition of TES technology's contributions to greater efficiency and reduction of greenhouse gas emissions from energy-intensive temperature-controlled facilities supports Viking Cold’s core mission: To transform refrigeration by reducing its carbon footprint, operating costs, food loss, and electrical grid impacts using innovative Thermal Energy Storage technology and services. The Sustainability Award was presented to Viking Cold during a globally live-streamed ceremony from Berlin, Germany, in February. View full video: here. During the event, pv magazine’s panel discussion with Viking Cold’s CEO, James Bell, further revealed that TES technology offers an effective and sustainable solution to a major environmental challenge: food degradation and waste. In fact, Viking Cold has developed the only proven, environmentally-friendly way to store solar energy in the cold storage industry. James commented, “TES allows energy-intensive refrigeration equipment in C&I facilities to be cycled down during peak hours of the day, effectively cutting the production of carbon emissions and reducing carbon footprint by tens of thousands of metric tons.” Users can expect improved temperature stability and to save up to 50% on their energy expenses while improving their refrigeration system efficiency by 20% to 30%. With a 20-year system life and no mechanical components, TES is an effective solution to managing demand and storing solar or other renewable energy in the cold chain. “This is an ingenious and very efficient solution to solar’s ‘duck curve’ problem and we hope to see widespread deployment,” said one juror from the selection committee. Read more about Viking Cold's approach to cold storage efficiency here. For more details on our recent awards and milestones, check out our latest press release. And for more information about a TES solution for your facility, contact us here. 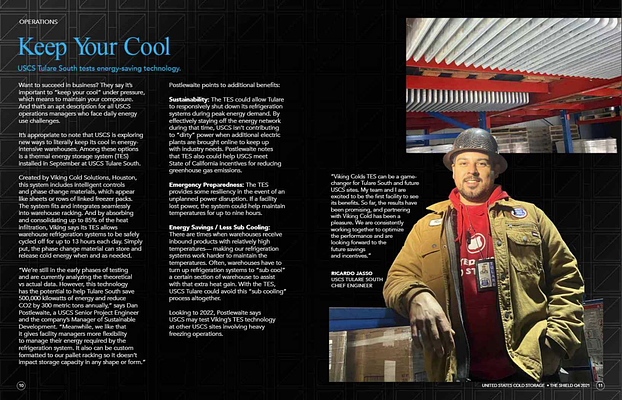 Another successful TES installation for a sustainability focused 3PL company

Initial results show 20%-30% energy savings on a recent deployment of Thermal Energy Storage technology in a US Cold facility in Tulare, California. US Cold references the energy saving and carbon reducing technology in their quarterly newsletter- the Shield- accessible here. Here at Viking Cold we are excited that another world class company has embraced the energy and cost savings of TES technology and the sustainability and carbon reduction that it provides to the cold chain which consumes more electricity than any other source except lighting. #sustainability #carbonreduction #vikingcoldsolutions