Butterfield and Vallis, a leading food distributor in Bermuda, is saving over 40% of their electricity 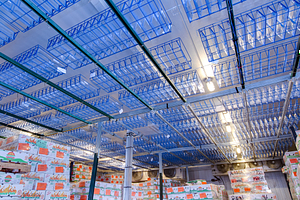 “We can confirm that we are saving 40 per cent of our refrigeration costs, which represent 50 per cent of the facility’s power consumption,” said Mr Butterfield. The company has invested heavily in new customer services, but the power savings help avoid passing on that cost to consumers, he said.  “We determined 2½ years ago to run with it — it is large scale, but we have the largest freezers on the Island.”

Measurement, Reporting and Predictive Capability
The monitoring and reporting system uses performance data with alarms to provide early warning when refrigeration issues arise. The system has predictive capabilities to tell when your equipment begins to degrade, providing early warning before expensive problems arise.